Christina: Hi is this Ernest?
Moi:         It is.
Christina: Hi this is Christina from Epic (Records), How are you doing today?
Me:          I’m doing great thanks.
Christina: I’ve got Richie from Judas Priest on the other line; are you ready for me to connect you?
…..and that’s how it all began. I have been waiting for this interview for about 6 weeks now and I’m sure everyone in my camp is sick and tired of hearing me yabber about it. We are finally here and I was given a strict 15-minute time limit to speak to the lead guitarist of one of Heavy Metals all-time most popular and successful bands………….Judas Priest.
Before we dive into the conversation with Richie, I’ll just say this. Even if you are not a metalhead, you no doubt will have heard (and liked) some of their hits over the years. Priest is responsible for classics such as Breaking The Law, Screaming For Vengeance, Turbo Lover, Living After Midnight, Bloodstone, and many many more.
Judas Priest has released 18 studio albums over the decades starting with Rocka Rolla in 1974. Without getting into too many specifics, the bands most steady lineup over the years has consisted of Rob Halford (vocals), K.K. Downing (Lead Guitar), Glenn Tipton (Guitar/Keyboards), Ian Hill (Bass) and Drummers Dave Holland and Scott Travis. (current)
In 2011, it was announced that Richie Faulkner would replace K.K. Downing due to philosophical differences with the band and management, and earlier this year Glenn Tipton was replaced by Andy Sneap when it was revealed that Glenn had been diagnosed with Parkinson’s disease. 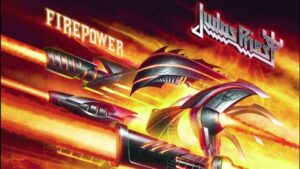 Priest are set to entertain Canadian and American fans in 2019.
The band will be supporting their latest album FiRePoWeR which is truly dynamic and the highest charting Priest album in the bands 44-year studio album history (Judas Priest formed in 1969). FiRePoWeR broke through all barriers and made its debut at  # 5 on the Billboard 200.

Christina:             Richie, I have Ernest on the line.
Richie Faulkner:   Ernest, How are you doing brother!
Below is what I’ve taken out of the 15 minutes and condensed it down for your reading pleasure.
Richie, who were your guitar influences growing up?
Richie: “The big ones are Michael Schenker, Dave Murray from Iron Maiden, Ernest Skinner Jr

Jimi Hendrix and probably Zakk Wylde I would imagine”
Your favourite current band other than Priest.
Richie: “favourite band, good question……I would have to say…umm……………..Judas Priest.”
Your favourite beer.
Richie: “Leffe”
The current vehicle that you drive.
Richie: “umm I drive a private jet at the moment (laughter) I literally don’t drive so um no.”
Are you married, kids?
Richie:“ absolutely not!”
The most interesting country you have visited so far.
Richie: “that’s a great question; they’re all interesting man, but in South America you get a lot of interesting things going on down there….Argentina, Brazil, Chile, Peru…those sort of places definitely”.
How do you keep yourself entertained or stave off boredom when travelling around the world when you are not playing?; do you read and if so what are you reading right now?
Richie: “well we do all sorts of things……….I just put a book down called Midnight (Dean Koontz) ….it’s about a little town in Northern California where everybody turns into werewolves…..it’s pretty fun stuff”
FiRePoWeR has just skyrocketed up the charts. Did it surprise Rob (Halford) and everyone in the band with its success?

Richie: “well it’s always…you never know where it’s gonna go, man,….you know you can do your best and create the best music you can at the time and you put it out there…. and you never know where it’s going to go…it’s like you letting a horse out of the traps…..you know, the fans put it there. We can’t do that; the fans put it there….it’s a great feeling….it confirms the power of Heavy Metal in 2018…and it affirms the passion of the fans for Heavy Metal in 2018……when you’ve got Metal right in the middle of Country and Pop Music and Hip Hop and whatever it is……….you’ve got a thick slab of Judas Priest in there which is undeniable…. and the fans put it there….just a fantastic feeling”
When was your last day job Richie and what was it?
Richie: “I was a barman (male bartender), you know, I worked in a bar. I think I left in 2006…..I had Steve Harris from Iron Maiden call me to go to Miami and do a session with his daughter. I went in the next day and ….I was polite about it but I said ……I’m not coming in tomorrow (laughter).
So what’s it been like working with Rob Halford, a true legend? Obviously, it’s been good, but your perspective, your words?

Rob Halford
Richie: “well I’ve said this before, Rob Halford isn’t just a singer you know, he performs, he’s a lyricist, he emotes, he’s theatrical……so singing is just a part of what he does. He’s’ not a one trick pony you know; he has a lot of passion and he takes what he does seriously and you can learn from that. He also has a lot of leather jackets (laughter).
So you’ve been in the band for what 7 years now; how has the reception from the die-hard Priest fans about you and (now) Andy replacing for better words K.K. and Glenn? Did they just warm up to you or…….how did that transition out? 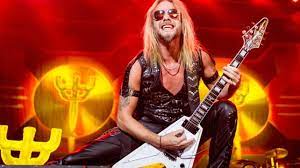 Richie: ” you know what man, I’ll have you know the Priest fans have been amazing since I joined the band….totally welcoming, totally accepting from day one…..I mean it’s always difficult where there is a change after 40 years…whether it was Michael Schenker in UFO or Ritchie Blackmore leaving Deep Purple and it’s someone else coming in…it’s always difficult but again it’s a testament to how much the fans love the band and they get their tickets and they come down (concert) and give it a shot and within 30 seconds they’ve got their hands in the air and their singing along and super accepting……………….there’s always going to be scepticism and that’s natural when a change like that happens…but again it’s because we love the music, we love the band. You know when change happens we’re always sceptical but hats off to the fans for getting over that scepticism and bringing their families down to the shows and ……again a big thank you to them”
Eight years ago, nine years ago, did you ever think you would be travelling around the world in such comfort and playing to millions of people? Was that on the radar? Did you have a feeling it was going to happen? ; or was it one of those things where you were trying your best in the music industry and one day someone tapped you on the shoulder and said …hey, you’re on.
Richie: “it’s a good question; I think that’s got to be the goal, it’s what you aspire to and strive for…..that’s the pinnacle of it isn’t it………..if you’re not striving for the pinnacle, you might as well do it as a hobby. I didn’t want to do it as a hobby and I strive for the top but you never know if that is going to happen or when…….it might not, but that doesn’t stop you from giving 1000 percent you know, and when that call came through….it was a bit of a pinch myself moment you know……..but you never really know for sure if it’s going to happen but you always strive to be that good so if that call comes through you are ready to grab the bull by the horns and take that opportunity …..and that’s kind of what I did and …was the path to take you know”
Upcoming interviews will be with Carlos Cavazos (Quiet Riot), Mike LePond (Symphony X) and guitar legend Adrian Vandenberg (Whitesnake/Moonkings).
Thanks for reading !
Error happened.
Facebook Twitter Pinterest linkedin Telegram
Newer April Wines’ Frontman still has many “Myles” to Trek
Back to list
Older Dee Snider Interview Coming Soon