I recently had a chance to chat again with Whitesnakes’s Joel Hoekstra about his dynamite solo project Hoekstra 13. Running Games, which is his sophmore release on his solo journey will make the hair on the back of your neck stand up. Joel decided on the title as per the theme lyrically which was one of “escape, running away, and leaving the past behind” Running Games has been getting rave reviews worldwide after he released a couple of tracks before the official full album debut this past Friday.

When I tell you the Whitesnake and Trans Siberian Orchestra guitar player’s new album is dynamite, it’s because it truly is. It is more work to BS your way through a subpar performance than to just avoid it altogether, so referring to the above, it’s seriously on the mark as one of the best new hard rock melodic albums I have heard in a few years.

In case you have been in lockdown for the better part of the last 20 years, Joel is one of the classiest axe masters out there. He has toured as Cher’s guitarist, performed in Broadway’s Rock of Ages, and had stints with Night Ranger, but his claim to fame is clearly his stage presence and melodic mastery with Whitesnake and the TSO.

To sum up Running Games, it’s a very smooth and crunchy riff-oriented album with power vocals from Russell Allen, who many would agree is one of the best all-around singers in the world. Early on, Russ made a name for himself by belting them out with hard rock legends Symphony X.

Listening to the album, you are going to hear many great things and an Yngwie Malmsteen vibe is one of them for many a reason. Rounding out the all-star lineup are Derek Sherinian (Sons of Apollo, Dream Theatre), Tony Franklin (Blue Murder, The Firm), Vinny Appice (Dio, Black Sabbath), and last but not least, Jeff Scott Soto (Sons of Apollo, Yngwie Malmsteen, TSO) on backing vocals.

The musical influences that Joel is fond of are apparent. In addition to his own style – which encompasses a vast library of sounds – there is no doubt that Satriani, Vai, Vandenberg, Viv Campbell, David Gilmour – and maybe even Ernest Skinner – are part of his musical DNA.

On tracks from the album like (Fantasy) and (Reach the Sky), I hear a Whitesnake-meets-Led Zeppelin beat, and Pink Floyd guitar tone at times.

To put things in perspective, I spoke with three world-class guitarists and had them listen to the album and this is what they told me.

Rik Emmett (Triumph): “There is an elite group of rock guitarists on the planet, a small handful of consummate professionals who can play with full mastery of technique and passion.  Joel Hoekstra is one of them. When it comes to the added value of stage presence, charisma, and physical style, he’s the total rock god package. Running Games is dynamite, but on the track (Finish Line) he’s a full-blown fire-breathing monster. There are arc-welding sparks flying off the guitar parts on this track.”

Sean Kelly (Nelly Furtado, Lee Aaron, Helix, Crash Kelly): “Joel is one of the best guitarists I have ever seen live; a perfect blend of melodic maturity and dazzling technical proficiency. I had the pleasure of sharing a bill with him in Oklahoma when I was in Helix and he was in Night Ranger. Running Games is an amazing piece of Classic melodic metal art with a modern production touch. It is delivered with all the taste and firepower we’ve come to expect from Joel.”

Ron ‘Bumblefoot’ Thal: “[I] love this album and Joel! Joel has it all – emotion, virtuosity, identity; he’s a great songwriter, great showman, and he’s a great dude.”

Before you go and order the album and read my summary of my chat with Joel; go back upstairs and check out the sampler and you’ll hear what all the fuss is about. I also need to ask: is it me, or does anybody else feel a Surfing with the Alien nostalgia via Joe Satriani with this animated video below and Satch’s album cover? 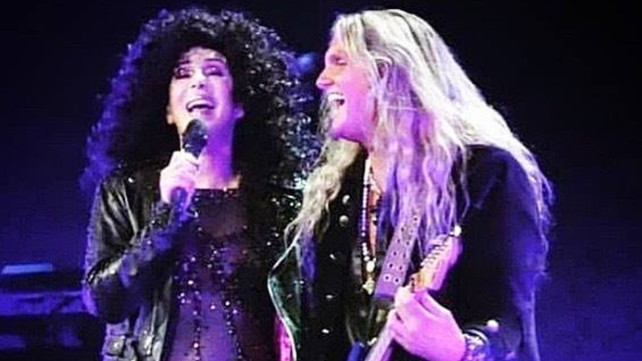 Joel was just as upbeat as the first time I interviewed him. Sometimes you can sense that the artist is tired, bored, or just doesn’t want to repeat the same thing over and over again. Joel’s energy was ceaseless as he picked up the phone with a”hey dude!”

We didn’t just talk music, but also about his family. The rock star is refreshingly grounded with his wife of 17 years (who probably can’t wait until goes back on the road ha ha ) and his two youngsters, aged nine and five. Following in his old mans footsteps, his nine year old is currently into Iron Maiden. When asked what his daughter is listening to, he responds with a chuckle “frozen.”

If you’re a guitarist and are wondering; he used about four guitars in recording Running Games. He used a Taylor acoustic, a Strat for the cleaner parts, a Phil Collen (Def Leppard) model Jackson PC1 for when he needed some whammy and sustain action, and of course his prized gold top Les Paul was the primary. The album was recorded remotely during the COVID lockdown, and Joel thinks it is the way to go.”It doesn’t put pressure on you playing in your own studio, as you play when you are in the mood”

I could go on about Running Games and Joel, but I have to get back to listening to it. Get your copy via Amazon, Apple Music, or check out his website at www.joelhoekstra.com.

On a somber note; please keep Rik Emmett in your thoughts tonight as he told me his father passed away yesterday morning.