I have interviewed drummers, singers, guitarists, and bassists from the worlds most famous bands over the years and decided not too long ago that drum techs, guitar techs etc. are just as important. 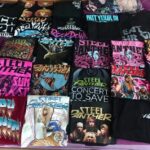 BUT….if it were not for the fans, the average fan; these interviews would not have taken 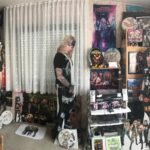 place and thus I decided to delve; and delve I did.

I recently was “turned on” to ?? 1 of the worlds biggest Steel Panther fans and being a Pantherite myself, I thought she would be a good fit. (for an interview perverts)

So today, I am happy to give you a nice candid interview with Andrea Loehr, the prettiest cat  in Deutschland (Germany)  and her Panther experience. I warn you though that at one point your monitor or phone screen just may see some T & A, but hey….that is what Steel Panther is all bout right ? The following video was uploaded as an adult only view, so you may want to make sure the kids are out of the room. 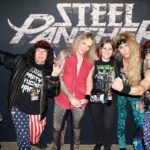 If you are not aware of who Steel Panther is your Mama didn’t raise you right. Steel Panther are a band that started out in the LA circuit in 1926 and through generations of lineup changes ended up with Satchel on guitar, Stix Zadinia (say that quickly twice) on drums, original tenor Michael Starr , and the late Lexi Foxx on Bass (RIP)…..retire in peace. 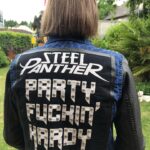 Management and friends were amazed and one famous quote by some guy is “wow, these boys really have something” and thus garnered them a record deal and the rest is history.

With chart topping albums such as All You Can Eat, Lower the Bar, Heavy Metal Rules and Smell The Glove………er wait….forget the last one ?.

Anyway, Andrea promised that before the boys leave her place this morning that she would relay my invitation to interview one of them as my requests have gone unanswered. Their friend posing as a lawyer keeps send me silly letters to desist. I don’t know what that means Kevin C, so don’t even bother !!

Anyway, I do hope to connect with the boys, but in the meantime, watch Andrea and keep playing with your  !!

Interview with Eric Martin of Mr. Big coming up !

Facebook Twitter Pinterest linkedin Telegram
This has to be one of the most entertaining, funny, confusing, informative interviews I have done. It has everything from "you're darn ...

END_OF_DOCUMENT_TOKEN_TO_BE_REPLACED

What I Found Out Blew My Mind and Will Blow Yours As Well/Carmine Appice, New Album and MUCH MORE !!

Facebook Twitter Pinterest linkedin Telegram
I recently interviewed Carmine Appice regarding his life and new album Energy Overload. The interview was overload as Carmine likes to ...

END_OF_DOCUMENT_TOKEN_TO_BE_REPLACED

Facebook Twitter Pinterest linkedin Telegram
I had a nice chat with Dave Aragon and his wife Kris; both of the incredibly unique new band called Hollywood Gods N Monsters. The band...

END_OF_DOCUMENT_TOKEN_TO_BE_REPLACED

Sexxi Lexxi Foxx is Back From the Dead