Hounds Come Out of the Gates With A Win

The Soo Greyhounds game out of the gates last night with a purpose and that purpose was to unleash a holy beating on the Battalion; and that is what they did.

The game featured some good old hockey with a dynamite tilt in the 3rd between Cam Gauvreau and Hounds rookie Tyler Savard.

Adversity was also felt with top Hound leader Ryan O’Rourke receiving a 5 minute major plus a game misconduct for checking to the head. I am not sure about rules this year as to whether that warrants and review by the league and further disciplinary action, so I guess we’ll find out tonight if he is in the lineup or not.

The Hounds were buzzing all night and the shots indicate that with a 29-18 margin in favor of the Dogs.

The Special teams were also a factor as the kids fought off and denied the Battalion anything during their 5 minute power play as per O’Rourke, and earlier in the contest they put one away on the Power Play with a goal by Tanner Dickinson.

Is was muddled affair; literally for me, as the feed that was supposed to come from the CHL was ……….well let’s just say it didn’t happen. 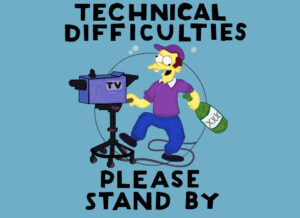 There were technical difficulties, but only here in the Soo as every other game in the league, the stream was seamless.

Let’s hope I don’t have to rely on the Rock 101 radio broadcast and highlights for my assessment tonight lol. In all fairness these things do happen; I just wish they would have done more of a dry run before the game as many fans have been waiting almost 2 years for this game.

With capacity limitations, people out of town, or for whatever reason could not attend, fans had been looking forward to this night and had it circled on their calendar for months, only to be met with a message “CHL Streaming Error”

Anyway back to the game.

Leading the way for the Hounds were the veterans Cole MacKay and Rory Kerins, both bringing a goal and an assist, and another 2 point player was Marc Boudreau. Tanner Dickinson had the other Hound goal.

North Bay did have their moments, but only to be stymied by Soo rookie netminder Samuel Ivanov who stopped 17 out of 18 shots. The only one to get by him was a goal in the first minute of the second by Battalion winger Matvey Petrov.

Next Up the Hounds host the Sudbury Wolves tonight at the GFL @ 7:07