Or They Are In For a Long Night.

The Soo Greyhounds start there 3 in 3 night road trip against a team that is built for a championship and the rankings indicate the said. The scouts around the country have them slotted in with three other OHL teams in the CHL top ten rankings. The Barrie Colts who host the Hounds are ranked this week at #6.

..So unless the Hounds haven’t eaten in a few days and are hungry enough to take down a colt, it will be a long night.

Coach Marty Williamson is back behind the bench and Soo product Nick Porco is an overage on this team that is built with a strong defence core and some potency up front. 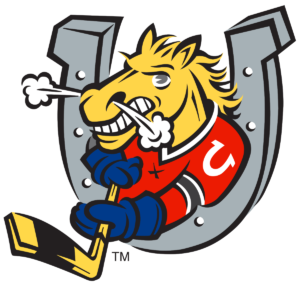 Players to watch will be overage big defenceman Nathan Allensen and Connor Punnett, while up front Nick Porco is always a threat and Jacob Frasca is coming off a good game where he had 5 shots on goal including two tallies in a losing effort to the Hamilton Bulldogs 5-4 last week.

The Greyhound come off of two good performances with a win and a loss. With three games in three nights, it is going to be interesting to see who starts in goal. Both goaltenders are rookies and with Samuel Ivanov starting both at the GFL last weekend, you know that Charlie Schenkel will get some action in the next three nights. My hunch is that with Ivanov playing well, he will get the start and slot in Charlie tomorrow. Just my thoughts, but Deaner makes the decisions not me.

Anyway, Ryan O’Rourke will surely be missed as he is serving the last game of his two game suspension and will be welcomed back tomorrow night with open arms.

The Hounds to watch tonight will be  Rory Kerins, rookie Bryce McConnell-Barker who gets more confidence with every shift, depending on the overagers who are in the lineup, Alex Johnston, Tye Kartye, and Joe Carroll always make their presence known and are scoring threats. Marc Boudreau will also be a player the Colts will shadow all night.

It’s going to be a good physical game tonight and if you are not in Barrie to see the game live, head down to The Canuck and watch the game for free as they will be showing all Hound games this year. Don’t forget to bring your medical papers as they are required to enter.

If you can’t make it, hit up Skip the Dishes and have the Canucks great food brought to you while you watch the game which will be available online via OHL Livestream and if you have Shaw, you can watch it that way.