Last night the Hounds once again showed offer their great propensity to win on the road. The announcers for the Guelph Storm even commented; ” the Greyhounds over the past 4 years or so have the best winning percentage on the road than any other team”

I believe this all started when GM Raftis approached ownership to allow the team to travel one full day before a game in order to lose the bus legs and get a proper nights sleep. Whatever the reason; whatever they are doing has worked and let’s not tweak that. 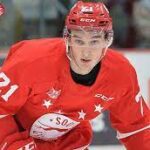 Anyway last night the Hounds played their second of a 3 game in 3 night swing and came up with another 2 points against the Guelph Storm cashing in with a 4-2 win.

Ryan O’Rourke had a very strong game breaking up some plays in the Hounds end while being a threat offensively on the power play. He showed his leadership and maturity by keeping his cool after being suckered into the Hounds bench late in the third and then taunted by the Storm player and just laughing and not engaging as a younger Ryan may have done.

Bryce McConnell-Barker added to his empty netter a night before by scoring a beautiful wrap around after claiming the puck from a surprised Guelph goalie (Oster) behind the net.

Other standouts were rookie Owen Allard with 4 shots, Rory Kerins… no points but 5 shots, and Robert Calisti with a goal and some really strong coverage in the Hounds end in front of Hounds goalie Charlie Schenkel who enjoyed prom night in the OHL with his debut.

Speaking of Charlie Schenkel; he played a very very strong game in stopping 20 or 22 shots sent his way. He was poised and relaxed in his OHL debut and made some timely and big saves.

After seeing the play of Charlie,  and it being early in the season with no wear and tear on the team and the goalies in particular; I think John Dean is going to go back with Charlie tonight just as he gave Samuel Ivanov back to back starts in the Soo.

We’ll see if my hunch is correct.

In a losing effort, scoring for the Storm were Danny Zhilkin and Luca Profaca.

The Soo Greyhounds in only a matter of hours will put the plug in the bottle of a 3/3 night road trip rounding it out in Owen Sound. The Hounds take on the winless Attack and need to play with the same intensity, as the home team is going to want to break through and get their first win. Below is the breakdown. 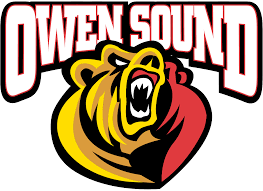 Wins are never easy in the Bayshore Community Centre as we know from recent experience. If the Attack are going to burst the winless bubble, they will need big performances from centers Deni Goure, Cedrick Guindon, overager D man Andrew Perrott and goaltender Matt Guzda. Julian Fantino, a rookie with a good start, will also be someone to watch if the Attack are going to ruin the Hounds chances of a road sweep.

The Greyhounds will continue to build on their confidence as winning on the road on two consecutive nights is quite a feat. Tonight, Bryce MB will put up some points, Rory Kerins will also contribute, and Ryan O’Rourke will also play solid. Young guns like Marco Mignosa and Owen Allard are starting to come into their own and with each game under their belts keep getting better. I am waiting for Tanner Dickinson to step up his game and maybe tonight will be that night.

is very cheap with a season pass of about $109.

If you have neither of these options available, why not head down to The Canuck and grab some wings and a couple of cold drinks and watch the game on the big screens with other Hounds fans.

Skip the Dishes is available if you chose to watch the Hounds from the comfort of your own home. Click the Ad for the menu.