Hounds & Wolves Set to Tangle Tonight at the Memorial Gardens 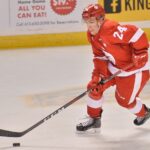 Tonight the Soo Greyhounds and our friends a few hours east, the Sudbury Wolves will meet for the second time this season. The first game ended with a 6-3 thumping of the Dogs by the Sudbury boys.

The Hounds have a record of 3-2 going into tonight’s action where they are coming off a very impressive road trip of three games in three nights and stealing 4 out of a possible 6 points.

The Wolves arrive with a 2-4 record and are definitely a better team than that.

The fact that this will be a strong rivalry with the teams playing each other 12 times over the year will factor very much into each meeting.

The wolves are the most penalized team in the league right now (88min) and they will have to stay out of the box.

Players to watch: Defenceman Jack Thompson who leads the team in points with 11 as well as shots on goal with 26. Others player to watch will be pesky Quentin Musty who as a rookie has shown a lot of spark.

In goal the Wolves will probably go with overager Mitchel Weeks until they get above 500 hockey. He sports a 2-3 record with a 3.85 GAA.

The Hounds sport the 4th best powerplay in the league and are clicking at almost 31% so this will be a something to watch if the Wolves keep playing undisciplined.

Bryce McConnell-Barker is third in Hounds scoring with 5 points and only 3 behind veteran Cole MacKay (leading the team) so I would be watching out for him as he is a rookie and ever more hungry.

Tye Kartye and Rory Kerins will also be shadowed tonight as they are the most potent Hounds.

In net, it is going to be a toss up as both goalies have played well and with Charlie Schenkel only having one start a road win to his credit, don’t be surprised if he gets the nod tonight. UPDATE (7:06pm) Samuel Ivanov gets the start. I am 0-2 in the last couple of suggestions that Charlie starts.

Before the game, get your grub on at The Canuck and if you are going to watch the game online or on Shaw, why not place your order with Skip The Dishes.

** I still have not received any information regarding my request that the OHL include in its’ post game summaries the players that were scratched whether or not healthy or injured; I will reach out once again in a few days**