Storm from Southern Ontario About to Hit Sault Ste. Marie

In hours the Soo Greyhounds will see how much wind the Storm from Guelph will unleash on the city during a two game back to back set. The Storm and the Hounds  played last Saturday with Guelph earning a 4-1 win; avenging an earlier season Hounds 4-2 win. Tonight’s game will feature the top three point leaders in the league with two of them being Hounds (Tye Kartye/Rory Kerins), while the other is Sasha Pastujov from the Storm. 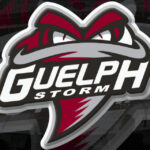 Leading the way for the Storm who are coming off a 4-0 win over the Kitchener Rangers this past Tuesday will be centreman and 2nd in league scoring Sasha Pastujov. Danny Zhilkin is also a threat with 9 points early in the season. Look for Burnett to go with Owen Bennett in net coming off of his first OHL shutout this week.

Tye Kartye, Rory Kerins, and Cole MacKay will lead the way as they always do for the Hounds. Rookie Bryce McConnell-Barker is getting better and better with each start and big Russian D man Kirill Kudryavtsev is coming into his own with 6 assists while looking for his first goal. The first time these two went head to head this year resulted in a Soo win in Guelph 4-1. That night coach  John Dean went with goalie Charlie

Schenkel; with the win, law of averages, and the fact that the young netminder has only 4 periods under his belt I would not be surprised to see the rookie get the nod. If you can’t make the game head to The Canuck and watch it on one of the TV’s or place your order via Skip the Dishes.

72 thoughts on “Storm from Southern Ontario About to Hit Sault Ste. Marie”