Canadian rock icons don’t come much bigger than Mr Bryan Adams. It’s almost 40 years since he burst into the spotlight with his Cuts Like A Knife album, before becoming a global superstar one year later with Reckless. That album gave us bona fide classics including Run To You, Heaven and, of course, Summer Of ’69.

Since then, Adams has garnered many awards and nominations, including 20 Juno Awards among 56 nominations and 15 Grammy Award nominations including a win for Best Song Written Specifically for a Motion Picture or Television in 1992 for (Everything I Do) I Do It for You . 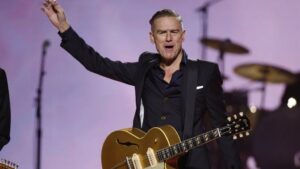 I was granted an audience during the early stages of C19 and thought I would add it the new site, as it was originally published for me via Montreal Rocks.ca (check it out.) Btw; the picture above is an original that Bryan sent me.

Since C19 and the pandemic has literally changed life in a way that we have never seen before; can you offer me your perceptions and experiences on how it may have changed the way you look at life in general?

BA: Well thanks to the COVID, touring for musicians has become an uncertainty, that has meant more time at home, for everyone. For me in a general sense, I believe we humans have brought this pandemic on ourselves because of the way we have disrespected nature and animals. If you look it up, 200 million animals are killed every day for food, how could there not be repercussions to that?

I became vegan thirty years ago, I wish I’d been vegan my whole life, but I wasn’t brought up like that. Now I have the knowledge that it’s a much healthier way, and I really don’t want to be part of the cycle of death and the bad karma that all that killing brings on when we ingest it.

I am writing to you right now from my humble hometown of Sault Ste Marie, Ontario,  and being in a small town like this; do you realize the joy (to the fans) and economic benefit you bring when you play a smaller venue like ours?

BA:  Thanks, it goes both ways and it’s an absolute pleasure. Sitting at home the past four months is the first time I’ve not travelled since sometime in the late ’80s, I usually do 2 weeks a month on the road. I’d be happy to play a small venue right now.

With social distancing being the norm and capacity limits for venues still in question; do you worry about never being able to play a small, intimate venue again, or playing an arena and it only being filled to half capacity and how that will look?

BA: Yes of course, but I believe it’s a bit too early to be able to tell if that is actually going to be the case.

During the major portion of the lock-down, did you have a regular kind of daily schedule to get you through the day?

BA: I start every day with a little yoga and stretching, that includes push-ups and sit-ups, then I go for a swim if I can, and I started to play tennis, so I do that every other day in the afternoons.

When was the last time you were recognized or asked for an autograph, outside of a musical setting?

BA: Probably from someone at an airport or travelling, so that would have been four months ago!

Is there any Canadian talent that you are listening to these days that you would recommend or would say that they are underrated.

It is widely known that you have a soft spot or affinity to Montreal; is there a certain reason?

BA: I just love it there, always did. When I started playing clubs in the early 80’s we always had a good turn out in Montreal and things just clicked. Word of mouth and then some support from Quebec radio made all the difference. Merci beaucoup!

I recently interviewed legendary guitarist, Adrian Vandenberg (Whitesnake/Vandenberg) from his home in the Netherlands and asked him who his favorite Canadian artist was. Without hesitation, your name came up as per your songwriting and the whole package. He told me that he took his daughter to see your show in Holland a few years back and it was amazing.

Moving forward; do you have a message to your fans worldwide, but more specifically Canada?

BA: Hang in there, it’s gonna be alright.

In light of piracy and social media, it is tougher these days for budding artists to make a living… not to mention COVID19. What advice would you give to someone thinking about making music a career?

BA: Get into software design in case music doesn’t work out.

Last question; coffee or tea? How do you take it?

**A huge thanks to Bryan for his time and to Katie at Bruce Allen Talent for helping to arrange everything. From what I have been able to gather from media for Mr. Adams; he is pretty excited for the New Years Eve show in Vancouver as well as his stint in Las Vegas coming up.

Thanks for reading and SUBSCRIBE to my YouTube Channel Border City Rock Talk as most of my interviews will be coming to you this way in the future. I have a few big names being confirmed so you don’t want to miss out. Thanks and God Bless**

Eric Martin of Mr. Big and I Discuss the 30th Anniversary of Lean Into It and Much Much More !!

Facebook Twitter Pinterest linkedin Telegram
Eric Martin of Mr. Big and I had quite a conversation. We certainly discussed the Lean Into It album which was released three decades a...

END_OF_DOCUMENT_TOKEN_TO_BE_REPLACED

Facebook Twitter Pinterest linkedin Telegram
But How Is It Going 2 Feel Mentally ? ...to the kids used to playing to a noisy crowd of 4-5000? Yes, the energy may be a little drain...