After making an embarrassing error yesterday where I originally wrote that 3rd year prospect Kalvyn Watson would eventually be shipped out as per a trade via limited ice time; my writing colleagues’ were quick to pounce. I understand now that he had suffered a fractured/broken wrist and that was why he has been sitting. So I will be more cautious and diligent in future and Kalvyn; no hard feelings ?

In my defense, I have emailed the OHL and asked that a column with the Game Summary include scratches (Healthy or Injured). I mean they have columns for attendance, referees and linesman, so why not have one for the kids sitting in the pressbox. I could listen to the game and hear the scratches, but let’s be honest they don’t state why.

A healthy scratch could be the numbers game or a player being disciplined for missing curfew. Now a scratch due to injury is more obvious and well; I will send another not to the OHL and see if I get a response.

Anyway, before we tackle the Knights win over the Hounds last night and get into tonight’s game against the Windsor Spitfires; let’s dabble a bit in the Hounds injury column. We now have three as another bit the dust last night in London where Jacob Holmes left the ice bleeding after taking a stick to the eye area. Included in that list is Tyler Savard who was playing extremely well of late and is out week to week (ankle) according to John Dean, and the obvious above of Kalvyn Watson.

These are three high end players and the Hounds are going to have to get creative to compensate.

In regards to last nights game; I wasn’t surprised at all with the penalties going against the Hounds (7) with only two going to the Knights. If you read my article yesterday you will know why.

In all due respect; most of the penalties were justified, but a few that were not called were,.. well maybe a consequence of London’s playing politics and lobbying with the league.

For instance; if the injury to a bleeding from the eye area of Holmes were to have been called; that could have warranted a Hounds 5 minute power play and with a lethal PP the Hounds could have taken control of the game.

Do you want to know what Dean thought of the non call ? “He took a high stick to the eye, and he was bleeding, there’s really no discussion” ( it was a penalty). “I have a player in the hospital checking his eye after a high stick to his eyeball, so I’m not sure how disciplined that is” he is quoted as saying after the game.

Anyway, the Hounds played well enough to win but were stymied at times by Brett Brochu in the London net and when the Hounds made a few mistakes London capitalized. At times Samuel Ivanov made some great saves, but there were few he would want back I am sure. He also had about three beat him, but the post/cross bar saved bailed him out.

I am in no way blaming him; just being realistic that as a first year goaltender, these things are going to happen and I think the Hounds are actively keeping their eye out for out for a seasoned older goalie for Ivanov to learn from or for another team to gain a prospective goaltender in the making. The Hounds if they want to remain in the CHL top ten cannot be giving up (as a team) an average of 4+ a game.

In a losing effort the Hounds had a great game from Tanner Dickinson (2points) who has been the best player during the last month. His plus/minus is through the roof at +12 and he is only a good game away from leading the team in points if he keeps playing the way he has. He shows so much composure and strength; he can hold off the strongest of opponents’ while on the puck and along the boards, and he is using his speed and hockey smarts to dumbfound opposing players.

Team captain Ryan O’Rourke showed some grit with heavy hits, as well as he picked up a point during the night. He also made so great defensive plays, but he needs to stay out of the box. Ryan took three penalties last night and we need him on the ice and not in the box.

And a big pozdravlyayu (congratulations) to the Russian tank Kirill Kudryavtsev for getting his first OHL goal.

All in all the Hounds played good enough to win and I wasn’t really impressed with the Knights as per previous years. I think the Knights success is riding on the Brochu goalie pads right now. 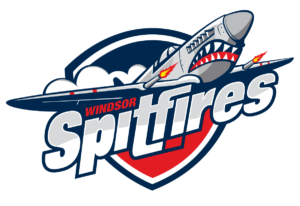 Coming into tonight’s game the Spits have won three in a row including a strong game last night in Sarnia with a 7-3 win. Coach Marc Savard probably had this one circled on his calendar as his son Tyler plays for the Dogs. The bad news is that Tyler did not make the trip and is here in the Soo nursing his ankle injury. Anyway; onward and upward as the Spitfires will have a test on their hands as the Hounds are coming off a gritty performance against Canadas’ #2 ranked team even though they succumbed 7-4 to the London Knights.

Players of note for the Spits are Wyatt Johnson, Will Cuylle, Matthew Maggio, Kyle McDonald, Daniel D’Amico and Pasquale Zito; all have 10 points or more early in the season with Wyatt leading with 13. This says quite a bit as the scoring is spread out so the Hounds need to be aware. Penalties are going to be a huge factor if the Spits take any; they are only killing 63.9% at home and that is not a good stat against a team like the Soo Greyhounds who are batting 32.1% on the road with the man advantage.

The Soo Greyhounds played good enough to beat one of the best teams in the country last night and look for them to dominate. Tanner Dickinson is going to lead the way and expect him to get a lot of minutes as per his play as of late. Rory Kerins and Tye Kartye will threaten the Spits tenders all night. If the Hounds play a disciplined and strong fast game, expect some penalties to be taken by the Windsor team to slow the Dogs  down. If this happens, the game will be won with power play goals.

With Kirill Kudryavtsev getting his first OHL marker one night ago, look for him to shine with some swagger.

In net; your guess is as good as mine, but at some point John Dean is going to need to insert Charlie Schenkel and maybe it will be tonight. God forbid, if Samuel Ivanov joined the Injury Club on the Hounds roster, there would be dire consequences as first year tender Schenkel has only faced 36 shots in just 5 minutes over 5 periods of OHL play in his career. Having said that he nurtures a 2.87 GAA during that blip on the radar.