Yes, the Hounds won and got the two points. They certainly dominated and played better than late in most areas. For the first time in about 4 or 5 games, I saw the flow and crisp tender passing that we saw at the beginning of the season.

Great efforts were had by someone I have been tracking for awhile and D man Caeden Carlisle was finally rewarded offensively with his first two goals. This kid is making all the right decisions and expect him to be in the lineup on most nights moving forward.

Tanner Dickinson with a goal, played another strong game and I really think that if he keeps it up, he could be the Hounds most valuable player by the end of the year. Every game he brings more to the table and currently he has 24 points which is only 4 shy of team leader Rory Kerins, but more importantly he leads the team in the plus/minus category by a mile with a +12 approval rating.

Speaking of RK; he enjoyed a 3 point night and veteran Ryan O’Rourke also played well with a two point effort. As refreshing as it was to see Caedon getting rewarded for his outstanding play as of late; it was especially nice to see rookie Marco Mignosa play a nice game being awarded with 2 assists and ending the night a +2.

Others Hounds getting on the board were Bryce McConnell-Barker, Tye Kartye, rookie Connor Toms, and Cole McKay who contributed with an assist each.

Although the Hounds had puck control for most of the night and most of the play was in the Otters end of the rink; somehow the Dogs managed to give up another 4 goals. That would be fine if Erie goalie Nolan Lalonde didn’t stand on his head and make some great saves.

10-4, which the score could have been would be ok, but against a struggling team like Erie; squeaking by 5-4 is not something coach Dean and GM Raftis will be happy with (in my opinion).

From time to time, I will be calling upon the knowledge of Sault Ste. Marie’s most revered Soo Greyhounds historian and hockey fan Chris Ski.

He knows things and remembers things that most people directly involved forgot or were unaware of !

I have never met a fan so passionate in my life, and I am sure he already has the drawings and blueprints for his Soo Greyhound casket when the Lord decides to take him; hopefully not for many many many years. 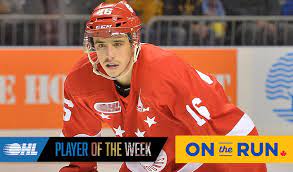