Nov 25th and the Soo Greyhounds don’t fair too well it seems.

In the year 1999, former coach of the Hounds Paul Theriault used the words “disgusting” to describe the play on the said day, and what do you know, it was no different some 22 years later..

Governors and wokeness will not allow coaches at the Junior level to use such language these days; you rarely see it, but I am sure coach John Dean might have stronger thoughts and words than he uses with the media.

Last nights game was a terrible and embarrassing carryover from the Hounds squeaked out win last Sunday to the same last place team.

It appears they have not learned any lessons about playing 60 minutes and thus had to leave Erie with their heads slung low and licking their wounds on the bus trip to the Kitchener Aud for tonights game.

The Hounds went up 3 zip and decided to just cruise; well cruise control didn’t work and they were awakened by a thunderous crash resulting in a 5-3 loss to a team that had only won 4 games this whole season so far.

The Erie announcer correctly said “the Hounds have fallen apart” and did they ever.

If you watched the game; you may agree with me, that their are no positives to take from this game. The Hounds were expected to win that game and got a hard slap in the face and I will not sugarcoat things in this column.

Scoring for the Hounds were Tanner Dickinson, Cole MacKay, and Rory Kerins.

Charlie Schenkel got the start and stopped 22/27 shots with two getting by him on Erie Power Plays.

Scoring for the Otters were Brendan Hoffman with 2, Noah Sedore, Connor Lockhart, and Elias Cohen.

Tonight after a somber bus trip the kids from the Soo will step on the ice against the Kitchener Rangers who have struggled this year. In the past ten games, they have only managed to win three of them and currently are on a 3 game losing skid.

Don’t get to excited yet Hounds fans; having been briefed on the Hounds loss to the leagues most unsuccessful team last night, and the Hounds less than stellar play over the past month, may give some confidence to the Rangers that will also have home ice advantage.

This year the Hounds have the edge with a 2-0 record against the Rangers, but that is in the past. Only tonight counts.

For the Rangers to break the goose egg against the Hounds this season with a win, they will need to rely on Francesco Pinelli (21pts) , Mike Petizian (17) and Joseph Serpa (17).

Between the pipes either Pavel Cajan 3.46 GAA or Jackson Parsons 3.59 GAA will have to be sharp as the Hounds will try and make last nights loss look like a fluke.

Tonight, look for Tanner Dickinson to lead the way again; he is turning into a leader in all areas. He not only sits tied for second on the team in scoring with 25 points, but he also carries the team with a +11 plus/minus ranking and he also has peppered opposing netminders more than any other Hound with 71 shots on goal.

Coach John Dean told me recently that “Tanner Dickinson has been one of the best players in the league in my opinion this season”. Who would be in a better position to know than John as he is at ice level watching all the players around the league. I will post my interview with John in the next few days so keep coming back to BCRT.

Aside from Tanner, Kerins, MacKay, and Kartye; you had better keep your heads up if you are a Ranger as I would bet on the fact that Ryan O’Rourke is going to set the tone tonight as Captains should do.

In net;  Charlie or Sammy will have to be sharp in the opening minutes because if the Hounds fall behind early; you can bet that the nagging confidence killer guy sitting on the Hounds shoulder pads will start chirping. 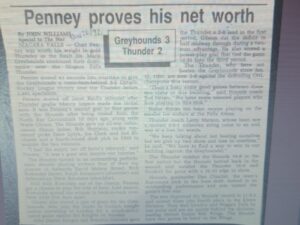