Tonight the Hounds who are on a 3-0 run play the North Bay Battalion and it should be a dandy ass game as the NB squad are playing very well and sit at number 6 in the Kia Top Ten in the CHL.

The game will probably see the newest member of the Hounds get a start in goal for obvious reasons. 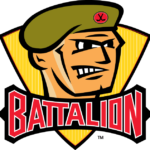 Players to watch out for would be Brandon Coe who leads the league with 46 points and his teammate Matvey Petrov who sits at number 5 with 38 points.

In net, the Battalion squad are very capable as Joe Vrbetic has a solid 2.55 GAA and 2 shutouts so far this season.

The Hounds who are the top scoring team in the league will be dangerous with Tanner Dickinson, and Tye Kartye who is leading the league on the power player with 14 goals.

Tonight, the newest pup Tucker Tynan who was acquired recently from Niagara should get the start. His record of 5-9 this year is not an indication of his talent as he came from a struggling team sit that last in the league.