.. the brick wall in front of the Sudbury Wolves net.

If it weren’t for the stellar goaltending of Mitchell Weeks, the Hounds would have put the Wolves to sleep in the first period. With a shot total differential of 14-4 in favor of the Soo, the score could have been 3 or 4-0 but Mitchell gated the neighborhood.

With half of the Sudbury team bearing jerseys with numbers and no name; you could have easily assumed they had been using their NOJHL affiliate Cubs as they looked like they were not playing OHL level hockey, but chasing their tails.

The jersey issue had something to do with the team arriving in the Soo with their practice jerseys or something to that nature; anyway no big deal. 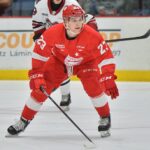 After surviving by miracle the 1st period, it was the Wolves who cashed in and erupted into a 3-0 lead in only a 4 minute and 40 second time frame (Michael Derbridge/Dominik Jendik/Kocha Delic) before the Hounds finally solved Mitchell with a goal by Rory Kerins near the end of the period.

The third period showed the Hounds swagger as they fought and won battles on the boards. With only 2.22 remaining in the game, Rory sealed the deal to tie the game and bring the Hounds to their 4th straight overtime contest; Chris Sierzputowski, what is the Hounds record on that ?

Anyway, it only took just over a minute for league scoring leader Tye Kartye (24) to bury a nice shot from the slot behind Weeks to give the Hounds their second straight OT win and a 2 point lead on Windsor in the West Division standings.

Other goals last night came from Derbridge for the Wolves and Kalyvn Watson and Owen Allard for the Dogs.

** Coach Dean took a timeout after the third Sudbury goal and I think it was a great move to settle the kids down. All too often I wonder why coaches leave the timeout untouched…you can’t carry it over to the next game right?

** Caeden Carlise played another excellent game and it is going to be tough playing the numbers game when Ryan O’Rourke returns to the lineup.

** I think the gentleman picking the three stars handed in his papers prematurely to go warm up his car; I am all for being impartial and not being a “Homer”, but 2 out of three stars going to the losing team? lol ; anyway, I think my assessment is true and it is no jab at the guy picking the stars…things happen. Weeks should have got one, and Rory deserved his but the winning team normally would have received two. I would have picked either Tynan who had no chance on at least 2 of the goals that got by him and made some strong saves, or Tye Kartye with 3 points; he would have been another good candidate.

** Algoma Public Health or the City of Sault Ste. Marie decided to have the game played without the canteens open. This makes 100% no sense and their is no rationale. People were sitting inches from each other for 3 hours. Canteen workers and people lined up for purchases would not be any more susceptible from acquiring any kind of virus. Once again, common sense…out the window.

This is one of three articles going up today as I spoke with GM Kyle Raftis yesterday about trades and the upcoming deadline and the Game Day Summary of the Hounds and Saginaw Spirit.

END_OF_DOCUMENT_TOKEN_TO_BE_REPLACED

75 thoughts on “Weeks was Strong but Hounds Climb Over….”