Before I get into the Hounds sweet win over Sudbury last night, I will briefly touch on the matter I alluded to yesterday.

I believe the OHL will sometime very very soon announce a pause to the season. Logically they have to, and if they don’t they will be in possession of a breakthrough in fighting, containing, a virus that is as weak as the common cold. Those are not just my words but the words of the MSM (mainstream media). This Moronicrom variant may be more contagious, but they admit it is weaker than all of the Greek terms before it.

What is the breakthrough miracle? Well it would be the fact that 18 players can sit inches apart on a bench while inhaling and exhaling germs and particles with 4 or five members of the hockey staff behind them and not be a factor in regards to this virus. This is big news !!!!

Here is my question? If they run a few more weeks with this and have no fans in the arena; why can’t they pass on that technology to the fans and then they can enjoy their favorite pastime ?

Hmmm. Anyway aside to my little jab at this BS……I can’t see how the organizations are going to be able to do this for an extended period of time. I am sure a few smaller market teams are close to throwing in the towel; and now to be forced to pay coaches, trainers, billets, ice rentals, $300 hockey sticks, road trips, hotel costs and meals, with no gate revenue would be close to impossible.

Selling a few t-shirts, keychains, and even employing a sketchy accountant would still not be able to make the numbers add up.

Actually, teams at this very moment are making arrangements to take out money from their accounts and refund it to the season ticket holders.

This is a mess and people need to start emailing and calling their local members of gov’t en masse and demand an end to this “Great Reset”.

Anyway, with that out of the way it’s happy time.

Last night the Hounds proved that when they want to be, they can be one of the most dominating teams in the league. In the last two games the Hounds have compiled 92 shots in six periods and and that shows puck possession and control.

Captain Ryan O’Rourke and Cole MacKay didn’t dress but the Hounds got contributions from their younger players who are improving at lightening speed.

On a side note; a player I have been noticing lately and is playing exceptional in the shadows is young D man Luc Brzustowski.

This kid, game in and game out is solid behind the blueline and in front of the net. He is poised and composed and I do not see him making many mistakes. For a solid defensive style D man; if your name isn’t mentioned much it is because you are doing your job. This kid deserves some praise. 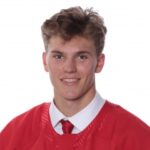 In his first OHL season, this stay at home defenseman has played in 22 games, has only 10 penalty minutes and boasts a +3 rating with 6 points. This is one of the Hounds unsung heroes this year and deserves more credit. Keep it up Luc…the scouts are watching.

Moving on; I swear their is a conspiracy going on. John Dean is playing me like a second hand guitar at a pawn shop. I knew Sammy would have to get a start and with the writing on the wall; I thought maybe because things are uncertain and work stoppage is very possible, that John would give the young lad a start last night before a possible layoff.

I fell short as you know of making one of my lousy Pro Line type predictions because I usually fall short with them.

Well Deaner you got me again. Ya reaaaaallly got me again ! (in the voice of George Costanza)

Sammy played a great game and it is comforting to know that if ….. if we proceed and get to a playoff scenario, that the Hounds will be in good hands with whomever they put between the pipes.

Next up the Hounds face the Windsor Spitfires back to back at the Memorial Gardens this Friday and Saturday night (fingers crossed) . It will be the first time Tyler Savard and his Father Marc (Spits Coach) will see each other as foes. A nice reunion I am sure.

One thought on “Hounds Dominate In 6-1 Over Wolves/Breakthrough Miracle Benches !!”