Kyle Raftis has been silent as usual but he has just struck gold. After todays embarrassment I think he got on the horn and resumed a chat with his counterpart Rob Papineau.

I knew we needed some help on the blue line and I have coveted Jack every time we played them. He is a big fast D man and puts up big numbers for not only a defenceman, but for a team. Post tonights game; he was leading the Wolves in points with 25. 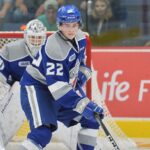 There were a lot of rumors about Thompson going here or going there but his asking price was too much. Maybe the patient Raftis held on just long enough for a desperate Papineau to get a deal done before the deadline tomorrow; maybe he lowered his demands and those were something that Raftis could entertain and as he said to me last week; “make our team deeper”.

The reason Thompson had to move is that Sudbury was going nowhere. The second and third top scorers on the team are rookies so Papineau had to shake things up this year and bring in some new blood and a few conditional picks.

If it is true that Marc and Jacob go to Sudbury, that will help them as Boudreau has some years left for sure and will log ice on a second or third line and Jacob who also has a couple of years left will probably be on the first unit on defense.

There has been no official announcement yet but I expect it to happen tomorrow by noon at the latest.

More to come with tomorrows postgame wrap from todays 10-4 bombing by the Windsor Spitfires.