Greyhounds Will Try and Avoid Being Stung in Sarnia Tonight 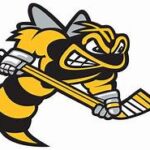 Players to watch will be team scoring leader Ty Voit (57 pts), Nolan Burke (46), and Theo Hill coming off a 6 pt game versus Saginaw on Wednesday night. He clocks in with 34 points on the season.

The Hounds will give the puck to Rory Kerins as much as possible tonight as he is tied for second in league scoring with 84 points. Behind him, Tye Kartye will try and put up some numbers, especially on the power play where he leads the league with 17 goals to go along with his 58 points. Making the rank at 28 out of 284 players regarding the 2022 NHL Draft Prospects rookie Bryce McConnell-Barker may have some swag in his skate tonight.

**Sarnia sits in 7th position of the Western Division where they are fighting with Erie and Kitchener for that 8th and final playoff spot.

The previous two back to back games between the Soo and Sarnia in February resulted in draw as both teams took one game a piece.

Tonights key for the Hounds will to feed off of two very well played games against the top ranked London Knights last weekend.

The Hounds find themselves 3rd in the Western Conference with Windsor clipping at their heels 3 points behind and have four games (or possibly 8pts) in hand.

This is playoff hockey right now and every player needs to step up as the Hounds as you know, have lost their best player “overall” in my opinion in Tanner Dickinson for the remainder of the season with his femur injury not too long ago.

The Hounds road record simplified is 11-13 which isn’t that bad considering a few points were gained in OT/Shootout losses etc., and the Sting have a terrible home record for some reason where they are 7-16 at the Progressive Auto Sales Arena. This should be a good tilt and high scoring if Sarnia gets into penalty trouble.**

Error happened.
Facebook Twitter Pinterest linkedin Telegram
Newer Hounds Get Stung in the Ass in Sarnia/Hounds Play 4 point Game in Windsor Tonight
Back to list
Older Will Russian Greyhound Kirill Kudryavstev Soon Be On His Way Back To Moscow ?