The Soo Greyhounds have shown again that they don’t have any consistency after losing two in a row this season at home to the Windsor Spitfires. Whenever the Hounds show some life going on a beginning streak of 2 or 3-0, they somehow lose a couple back to back and this time it was with the home ice advantage against a team that has shown that they have our number.

The Hounds better hope that someone knocks off the Spits in the playoffs because the last thing we would want is to meet them unless their is some miracle cure. We have a dismal record of 1-7 against Marc Savard’s team.

Rory Kerins had 3 points in Saturday nights loss and Kalvyn Watson picked up 2 of his own on Sunday afternoon. 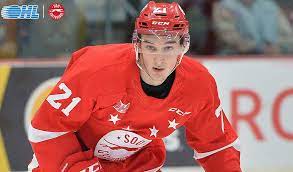 Team captain Ryan O’Rourke did not show his leadership and sportsmanship this weekend as he picked up 13 minutes in penalties including 2 penalties for unsportsmanlike behavior. Both occurred in the final minutes of the games the Hounds were losing.

This trend is not something showing leadership skills and coach Dean may want to have a chant with Ryan or sew the C on someone like Cole McKay. Because of the discipline issue; the Hounds may be without a talented defenceman for 2 games or more as the slewfooting major he took last night is usually followed by a suspension.

Not sure what else to say, but the Hounds need to quit taking all these “positives” from games lost and call a spade a spade and admit they were outplayed by a team that has barely taken their skates off the ice in the month of March having played 14 games since March 3.

Losing two games back to back at home against a team that has played almost every other night is unacceptable; especially when you have been able to rest your team for about a week.

Error happened.
Facebook Twitter Pinterest linkedin Telegram
Newer Tanner Dickinson Was the Nucleus of the Greyhounds It Appears/Saginaw and Hounds Battle Tonight
Back to list
Older Dogs Looking to Shoot Spitfires Out of the Skies over Sault Ste. Marie