Has Anyone Seen This Man ?

No, he is not missing; and after speaking with him a few times I can tell you he is very much alive. What I can say though in regards to the title is that before meeting Him, I had definitely heard about Him. With the interesting pieces of information regarding this figure it was only natural that I meet this mysterious man; I sensed a story or an article and I hope you enjoy it as much as I did writing it. Now I will not beat around the bush anymore; everyone please meet Peppi.

Walking around the area since moving here I would often see in the Richards Landing marina parking lot an old Chevy with an old fashioned style camper on it. This intrigued me as per the E=mc 2. I was told that the owner of that aerodynamic piece of machinery is living in the houseboat for sale (pictured) so I approached him for a little chat. Subsequently he told me that this Chevy 1500 has over 400 000km on it ! 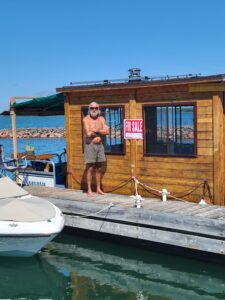 Upon meeting this nomad I could see and sense right away that he lives an opposite lifestyle than most. He eats from the land as much as possible, believes in living in the NOW, and has the wisdom and mind of a figure like the Dalai Lama or Sadhguru.

His story is quite interesting and I may jump around a bit but you will get the drift.

He was born in Quebec 76 years ago and was married to the love of his life for many years. He has two children and four grandchildren between the two. His siblings and the aforementioned all live back East in the Montreal area. His former life consisted of being a workaholic in the food processing industry as a technician of a company he had owned.

Eleven years ago after the passing of his wife, Peppi decided to sell their dream house in Hawkesbury Ontario (near Ottawa) as per the memories of his lost soulmate. He then decided to travel and has been on the move for the last 10 years crisscrossing Canada and the States where he spends the winter months in the Arizona area. He has also been to South Asia and Africa during that time.

He tells me he has been coming to the marina here on the Island for the last three years during the summer months as he was driving down Hwy 17 and stopped in at Looney Tunes and thus his home on the water was purchased and his temporary Island status was born.

He is as agile and fit as any man I know. It was only a few years ago that he tells me that he traveled to one of the most spiritual and rich in human energy places of all; Nepal. We chatted about the differences in life and attitude that the people have there with only few possessions. He told me of the Sherpa’s that literally make their own shoes by cutting up tires and strapping the rubber to their feet. 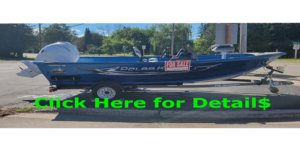 I relayed to him similar experiences I have had where I saw the ingenuity of the Cubans or Peruvians and ability to figure out how to make use of things that us Westerners from wealthy countries.. that we greedy people..toss into the garbage and take for granted. I once told my 23 year old daughter that the best classroom and education is travel and I stand by it.

We spoke for about 30 minutes and the peacefulness of his being was obvious. To give you a sense of this man, this is just a little part of our conversation in his own words. “I have detached from society…….I don’t care about much. I do care about nature, litter, and stupid people (laughter) but I live for the moment…it works for me….and I feel I am in a groove right now. I don’t have a watch or anything like that and this cell phone is only there in case someone needs to get ahold of me or if there is an emergency.”

Besides fishing and just being in the moment Peppi is an avid reader. What does he read? He says “soup to nuts man.” It was interesting because that is the first time I have ever heard that term in my life. From studying the teachings of Buddha to mysteries there are no boundaries for him in respect to literature.

Anyway during our chat it was a bit shocking to hear from Peppi that this is going to be his last hurrah here on the Island. No he is not sick or anything like that; he has just decided that he goes where the winds take him and his spirit is telling him it is time to move closer to the place of his birth and settle down permanently.

Currently he is looking to sell this incredible boat only purchased three years ago and he says money is not what drives him. Please inquire because he tells me to publicly let it be known that he was asking $25k at the beginning of the summer but headaches are not what he wants. He is dropping the price SUBSTANTIALLY as the days are getting shorter and he is getting ready to start folding his clothes and putting them in his rucksack. He told me the price that he is dropping it to and I could not believe it so I contacted a friend of mine who is in that line of business as I thought he may be interested. This is not an article about selling a boat; it is an article about a unique and interesting man and this chapter is included as the topic came up just as naturally as water flows downhill in a stream.

He tells me there is always a plan B and if he cannot sell the boat…..he is probably not going to waste money having it moved East with him. I am sure Peppi has faith in the unseen powers that things will find a way and the answer will be given to him.

What is he looking for specifically in a place to put up his feet and rest his body and soul?  He points to a little cabin off in the distance that locals know of that is straight out if you are looking past the second buoyed raft at the Women’s Institute Beach. That is what he wants; he wants somewhere that is immersed in nature with the trees and water and a good view of the sunrise and sunset. It seems to me all he wants is what God has provided us.

Anyway, be sure to wave or say hi to Peppi as it may be the last time you see him.