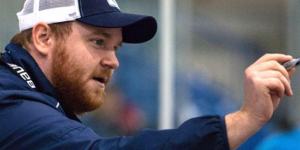 With little time left; the Hounds have inked the replacement to Jordan Smith who signed with the Springfield Thunderbirds recently.

Brendan Taylor who played with Raftis in Peterborough now joins the club to mould the young blueline core. Taylor has spent the last 6 years with the Mississauga Steelheads where he had a similar role.

“He brings a distinctive understanding of the development path of a modern-day defenseman, and with his experience as both a player and coach in the OHL, we believe he’ll bring a unique perspective to our bench this season and will support our players and staff to continue pushing their development. Brendan is going to be an excellent addition to our coaching staff this upcoming season,” Raftis said.

The Hounds would also like to announce that they have signed 16 year old defenseman Matthew Virgilio who will be at camp commencing in just over two weeks.