If you glance the obits from time to time, you will probably notice as I have, the increased number of deaths due to suicide or overdose. This trend has been on an uptick since 2020 and an article published recently via legacy media concluded that SSM had one of the highest rates of opioid overdose numbers in the province. One has to wonder as to the reasons behind the sad but true fact here in Algoma; it could be our the proximity to the American border, the homelessness situation, economics, or whatever. The bottom line is that it is real.

I have also been aware of the very high suicide rate in our community as I have known of personally or known of informally, at least 20 people in the last two years that have taken their own lives. I have also been aware that at least double that number have done the same as per the last paragraph in the obits which says “please make any donation to Canadian Mental Health” etc. Statements of that nature are a indicator that the person written about took their own lives.

For whatever reason these suffering people chose to end their lives is irrelevant, as you can’t untie this knot; all we can do is to try and possibly influence this sad situation from not coming about within our own hemisphere of family and friends by observation.

I would like people reading this to maybe make that phone call to that person that they may know of that has a substance abuse problem via alcohol, drugs, etc. That person with depression issues or mental health issues is also a person that could succumb to their demise; especially during the run up to Christmas and the New Year.

Obviously we should watch out for the signs year round, but during the month of December, without checking the numbers, I would guess that suicides are higher during the 12th month of the year.

Well my observations lead me to think that commercialism is a main reason for people to feel left out and alienated. All of the commercials on tv and social media show people laughing, hugging, and insinuating that life is just great and that money grows on trees.

I could go on and on and on about this topic but I have to shut up, keep it short and simple, and maybe the message sticks.

It is nice to receive a nice email, Messenger message, or text, but the real show of empathy is in the human voice.

I don’t follow the Facebook copy and paste challenges like “upload your most recent photo“, or “what was your first job” etc but I do have a challenge and I am pretty sure that if some of you follow it; you may be surprised at how good you will feel when you reach out to someone unexpectedly and receive a very grateful response back.

If you know someone that may have any of the issues going on that I wrote about above; please take 15 measly minutes and call that person under the pretense of “just saying hi”. You may never know how powerful your  human voice was to the person you have just called, but you will know that, at the end of the day…..it can be only one thing…….positive.

This is my only Copy/Paste/Challenge.

Greyhounds May Be Turning the Corner

This past weekend saw the Hounds beat Saginaw 4-3 and Owen Sound 5-3. Both games showed that the Hounds are starting to get the bounces and grind out some wins.

The Greyhounds have struggled in the standings all year but have not struggled with being in most games. The fact that the team has trouble scoring but still make all games close is a sign that the team can compete in this league with… experience…. and maybe a piece or two added.

I have been suggesting all year that the Hounds need to acquire a forward in order to make sure that they make the playoffs and nothing has happened yet. Coach Dean and GM Raftis are very patient and maybe that is paying off.

Lately players such as Watson, Montroy, Hookey, D’Intino, etc have started to assert themselves and that is great news if you are a Hounds fan.

Now, Food 4 Thought; it was recently announced that rookie forward Dustin Good has been sent down to the Elmira Sugar Kings in order to get more ice time as he has been a healthy scratch on most nights. Is it possible that Hounds GM Raftis is making room on the roster in order to bring in that forward I have been talking about all year? My hunch is that it is, and if my hunch is accurate, I would think the move or acquisition will be made before the Christmas break.

Keep it up boys and keep focused.

** As per my other hunch; Saginaw forward Hunter Haight did exactly what I thought he would do and contributed a goal and an assist in his first game wearing a Spirit uniform in the Saginaw 4-3 loss.** 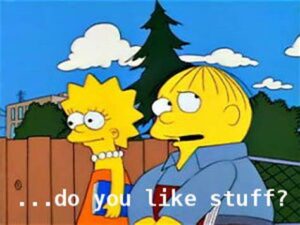 **Alcoholics Anonymous meets every Friday night at 7pm at the rear entrance of the Harmony St Marks United Church on Richards Street. If you think you may have a problem, feel free to attend and/or call 705 254 1312.

**Alcoholics Anonymous meets every Sunday afternoon at 2pm at the Bruce Mines Library.