Anyway, the Dodies hail from the hockey dynasty of Israel, ? and I first heard about them a year ago when I did an interview with Bumblefoot, who at the time, was in Israel working with the  upcoming young lads. Since that interview I did some research and they combine their own unique raw sound that has a different band in almost every note or lyric. When you listen to their album It’s One Hell of A Ride, you will hear dozens on hints of bands ranging from Oasis, to Garbage, to Neil Young, to Spinal Tap 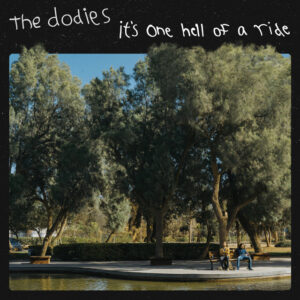 Ok ok. ..no Spinal Tap…..I guess I am just plugging an upcoming interview I have being scheduled with Harry Shear.

Back to the Dodies; Below is my Q and A with one of the biggest up and coming bands internationally. I can see these guys developing a cult following. My favorite cutt is “Sweet Solitude.” Grab the album “legally” and you’ll see why one of rock’s most sought after guitarists traveled around the world to work with this young lads.

How old are you guys, surely you haven’t been riding very long? ?

You are touted and advertised as a young garage band, but being so young, it’s almost like you are still in the driveway per se. ? In all seriousness, how did you come up with the album title It’s One Hell of A Ride…keeping in mind your career is short so far and you have many more miles to go?

Ran: Well we look younger than we are. We’ve been playing together since we were 14 so it’s been a while for us. We wrote most of the songs on It’s One Hell of a Ride in our early twenties, some even in our teens. We’ve written 2 more albums since, that are waiting and ready to be recorded. It’s like we have a career waiting to happen but certain geographical reasons prevented us from moving forward.?

Yoni: I thought of the album title when I was tripping. “If we need suffering to appreciate the good things in life then I guess this life is sort of like one hell of a ride.” At the time I thought it was the deepest thing in the world so I figured it could make a good album title.??

Is there a reason that you are only a twosome? Would it not be easier to incorporate a bass player keyboardist and that way you could make the music a bit more dynamic as you would have less to concentrate on? If that makes any sense…or do you guys want that raw, easy and less complicated feel….circa….the Beatles etc.??

Yoni: Ran’s drumming has become simpler since the “drumming with one hand” thing started, which like you said, has more of a “Ringo vibe” to it, but I do use an octave pedal on the guitar with some songs, so that gives the guitar a fat sound and frees Ran to drum his two handed style way. Ran came up with the idea of drumming with one hand and playing synth Bass with the other because we couldn’t find a bass player to fly to the States with us. This turned out great because we love the sound and it helps with the logistics of things, one less mouth to feed, one less human to try and develop chemistry with, and also it’s quite a spectacle at shows.

Who were your musical influences…..Western and in Israel and the Mid-East?

Ran/Yoni: Honestly we listen mostly to British and American bands. I can’t say there has been a Middle Eastern band that influenced us sonic-ally or melodically. Bands like Nirvana, Radiohead, Soundgarden, The Beatles all have something that we’ve only heard with Western bands. The Israeli bands we liked the most are mainly influenced by North American/European bands as well.? ?

What did Sons of Apollo and former Guns N Roses guitar player Ron “Bumblefoot” Thal add to the mix, while being in the studio with you guys recording?

Ran/Yoni:? First of all he added the actual mix of the songs, which he did great. He also was great in the way he trusted us enough to give us freedom to try and make the music sound like us more than we thought possible. He was the first one to suggest we should record our album the same way as we play live – including synth bass and one handed drumming. It was such an experience in other ways as we have a similar sense of humor so we laughed till our stomachs hurt at some occasions.?

I am a Canadian writer writing for Boston Rock Radio in the States, but I would be deported from my humble country of Canada if I didn’t ask if you have any favorite Canadian musicians? 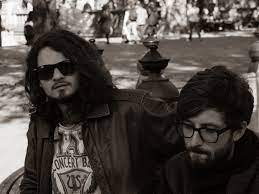 Yoni: Neil Young’s “Powderfinger” is one of my favorite covers to play on my acoustic, still moves me when I sing his lyrics. I’d say he’s my favorite.?

Ran: Death From Above from 1979, hands down. Even saw them live in Europe 2 years ago. I actually heard about them for the first time about 5 years ago, when I was searching online for duos with big sound. All in all, we’d love to play Canada. The town Dieppe in Canada was one of our “top cities” with Spotify listeners for a while which was pretty cool.?

Your album, to me, hits many notes in my musical library head. In your songs, I hear twinkles of Nirvana, Garbage, the Beatles, The Smashing Pumpkins, Radiohead, U2, Greta Van Fleet, and many more. In particular, “Crowded House (Sweet Solitude)” and “Buffoon” have a Nirvana sound. Do you agree with my take on your sound?

Ran/Yoni: Yeah that sounds about right haha. Great bands. We’ve never thought of Crowded House as an influence but “Don’t Dream It’s Over” does have similar chords to “Sweet Solitude.”

What are your favorite songs on the album…for each of you and why?

Ran/Yoni: Well we get this question sometimes and usually answer the same way. We love all of the songs on the album, but there’s usually one song we feel is really good and really underrated. “Buffoon” is that song because of the lyrics, and how it builds, and it’s weird melody. So that makes it super nice that you mentioned “Buffoon” in the last question. Thank you.

Who is your current favorite band?

Ran/Yoni:? As far as rock bands go it’s probably IDLES. They have their own spin on Punk music.

What would you like the Western readers to know about life in Israel, that we probably don’t know?

Ran/Yoni: People in the west get a lot of different messages about Israel. One feature we’d say we do have here is our limitations and the small scale of things. The west is BIG and has A LOT, which can sometimes numb you. Israel is a very small place and some things will probably never be as accessible as they are in the west. That can sound like a bad thing, but there’s also something very sobering about it. Half a day’s drive, for example, is as far as you’d ever have to go if you wanted to meet your friends or family.

Are their plans in the works on a North American tour?

Ran/Yoni:? Yes Yes Yes. As soon as touring is possible, we’ll do everything we can to make that happen!!!