Hounds Win in OT But Lose In Regulation

The Soo Greyhounds managed to lose the lead with under 1 second left on the board which forced them to go to extra innings to beat the Barrie Colts 4-3.

The Hounds lost the services of Tanner Dickinson late in the third and his status is unknown for the future. It looks like either a knee or shin related injury from the way in went into the boards. 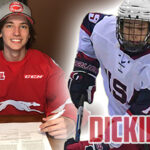 Scoring for the Hounds were Ryan O’Rourke, Jack Thompson, and Rory Kerins (2) who now is tops in the leagues scoring race with 67 points.

Tye Kartye also had a good game with 3 assists.

Scoring for the Colts were Ethan Cardwell, Brandt Clarke, and Hunter Haight.

For now; let’s just keep our fingers crossed that the best Hound overall this year in my opinion, Tanner Dickinson is not sidelined for too long.

One thought on “Hounds Win in OT But Lose In Regulation”