The Point of Video Review?/Hounds Enter Round 2/Dickinson Issue a Secret too.

As the Soo Greyhounds get ready for tonight’s game against the Flint Firebirds there are many questions that are still unanswered and need to be addressed.

Does Coach Dean have what it takes to bark loud enough in the dressing room in order to keep his valuable assets on the ice and not in the penalty box and press box?

It has been a lingering problem for much of the year and time after time when our go-to kids get sidelined for bad behavior they get nothing more than a short verbal talking to and some soft tough love while addressing them in the media.

It seems to be the case because the same infracters continue the bad behavior.

I wrote at least two months ago that Tucker would only be as good as his temperament and BAM he gets suspended for 3 games… in the playoffs!! This is the goalie that Kyle traded for and for this exact time. 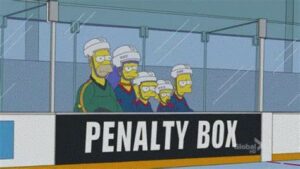 Another guy that Raftis scouted and dealt away a draft pick for hasn’t even dressed for a playoff game and has been a healthy scratch. Ty Anselmini was picked up by the Hounds for his grit and temperament but Coach Dean could only suggest that the penalties he takes were warranted because sometimes he takes others to the box with him. What ??

Ty in my opinion hasn’t been scratched as per a numbers game; it is because he may be a bit of a liability with his temperament and discipline.

The last guy you would think that should be in this category is your captain but he is.

Captain and future NHLer Ryan O’Rourke has taken some really irresponsible penalties this season and in the playoffs only to be met with a kind of ‘well he’s an emotional kid etc etc’ kind of response from the coaches. If these things with any player …star or not, would have happened under a Craig Hartsburg or Sheldon Keefe; playoffs or no playoffs. .they would find themselves riding the pine or sitting out a game or period. You don’t teach young kids with excuses. Of course I know society is soft these days but ….. hey look at any winning team and you’ll find discipline.

All of the above players including Anselmini could help this team to a long playoff run if they knew their boundaries and were put in their place but so far we have seen Jekyll one game and Hyde the next. Let’s hope that the hammer has hit the gavel this past week and the kids are not only excited but somewhat fearful of how they take out their emotions on the ice.

Listen I get it; refereeing is not like it used to be; suspensions are given out and issued not so much as per situation but almost like algorithms via Artificial Intelligence.

I do understand it is more complex these days, but at the same time when other teams face the same off and on officiating and, what is a penalty and what isn’t a penalty at times, and they get through it unscathed, it leads me to think that WE (Hounds) have to adjust to that situation and not the situation adjusting to US.

If the Hounds gut out this series against a similar opponent the sky is the limit.

Tanner Dickinson has been recovering from his injury for 12 weeks now and from just general knowledge; a broken femur can heal in that time. Don’t forget the Hounds and Tanners handlers have the best doctors money can by so in two weeks if the Hounds can advance we may see some Tanner Time but that is just speculation and wishful thinking.

I asked GM Raftis about his status yesterday and it changed from a couple weeks ago where he commented that he is progressing well but hasn’t skated to ” we don’t comment on the medical status of any of the players”.

I am not sure if that is code for he is getting close to coming back or that the guidelines have changed in the last few weeks but it is perplexing for sure.

Since Sammy Ivanov is coming off of two straight wins and a shutout; what happens if he wins the first two games for the Dogs? You surely don’t go back to Tynan because he was traded for or is the older kid right? I would say Dean would or should stick with who is winning; afterall Tynan put himself in the position he is in now and that is how the cookie crumbles.

Up front if the Hounds can play using their speed; they have two solid lines and a kickass power play to boot. I don’t see why they can’t win this series. Like I said, the only way they will lose it is if they take too many poor penalties.

Yes Jordan Smith has done a great job with the PK since mid January but they still are average in that category. The Firebirds to win will try and goat the Hounds into the box to use that tool, and at the same time man on man the Hounds behind their blueline are good but not great.

For the series win goaltending needs to excel as it is also one of the weaker points for the Greyhounds with their inconsistency.

Some games Sammy and Tucker steal the show but others they lose their tickets and miss the show.

** On another note; what is the point of having a video review if people reviewing it can’t see the screen and figure it out?

Last week a goal got disallowed for the Kitchener Rangers only to be ruled a goal a day later; this is playoff hockey so what are the video review guys being paid for? The same issue stands with the recent

unveiling of the Hounds banner with Tye Kartye tying the mark for the quickest goal in a game at 8 seconds. That is utter bul**hit and everyone that has watched the replay knows it. As you know I posted in a previous article a screenshot of the goal in the net 6 seconds into the game.

Personally in this case I am almost 99% confident that the guys in Southern Ontario didn’t overturn that one because it would be “setting a precedent” and well………..that’s political crap.

Anyway; I know this will be a hard fought series and with the great coaching staff we have and talent we should win the series.

Like I said earlier…just like video killed the radio star and penalties can stop the Hounds from going far….

58 thoughts on “The Point of Video Review?/Hounds Enter Round 2/Dickinson Issue a Secret too.”