Last night the Soo Greyhounds played an almost perfect game. Aside from a couple D zone mental miscues, the Hounds played a playoff style game in their 5-2 win over the Owen Sound Attack.

The newly acquired trio of Jack Thompson, Ty Anselmini, and Keegan McMullen made an immediate impact.

Thompson played a conservative game in his Hounds debut and had two assists, Keegan McMullen acquired by Raftis for his skill and leadership had a goal in his first game playing for the Dogs, and Ty Anselmini in my opinion was the just what the doctor ordered. Ty isn’t the tallest kid on the ice, but the five foot ten inch one hundred and ninety pound forward plays with an edge. Ty was involved in more than a few scrums after the whistle and he definitely will be a player that gets under the skin of the opposition.

Tanner Dickinson skated circles around all players last night and was the best player by far. Tanner ended up with a goal and two assists, and was also responsible for  23% of the 38 shots on goal for the Hounds. Dickinson hit the net 9 times and barely missed on a few others. He was like a man playing against kids.

Ryan O’Rourke also played a great game in two ways; he had a goal and two helpers and he also kept his composure and stayed out of the penalty box. At times Ryan as captain has taken some bad penalties and I know this is something he is working on.

Tucker Tynan wasn’t busy but came up big when he was called upon. 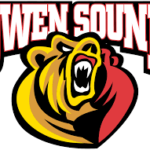 In order for the Attack to win today, they will have to stay out of the penalty box. If not for the 3 power play goals they gave up they would have been in the game until the final buzzer even though they were dominated all night. Players that will make a difference if they win will be Nick Porco, Mark Wooley, and Stepan Machacek with the latter two being significant for getting under the skin of the Hounds. Wooley is a beast out there and as much as you hate him (in a hockey friendly way); you’d love to have him on your team.

The Hounds should maintain the same energy level as yesterday as it almost feels like a new group gelling with the new players and the players back from injury. Today leading the way will be Bryce McConnell-Barker, Tye Kartye, and Tanner Dickinson who will keep putting up numbers. If the Hounds can get Wooley and others off of their game and take bad penalties; the Hounds will win the game on the power play.

With only 15 shots on goal, there will be no need to rest starting goaltender Tucker Tynan and I believe he will start.

**Is it just me or do you also think the 4th Hound goal actually hit the post and came back out?**