This is how my conversation with Whitesnake’s David Coverdale started. The call came in and David actually said “Ernest? Is this importance of being earnest?“…as he was obviously referring to the 1895 play by Oscar Wilde.

My phone cut out when I gargled back my reply to which the gentle tongued Brit said “where are you on the f**king space shuttle? “ I gargled a bit clearer as I changed locations in my flat…..is this better? I coined. “Ahhh yeah, it’s like a sex talk darling” he responded with all the smoothness you could imagine. 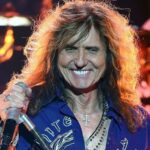 This was my first interaction with the British singing legend and he was as relaxed as he appears in all of his interviews.

I was speaking with David to discuss his recently released The Blues Album which is a compilation of previous Whitesnake and Coverdale songs with a bit of a bluesy twist if you will.

The release is actually the final of a trilogy; the first two being Love Songs, and the Rock Album.

On the 14 cut vinyl, you’ll get songs from the albums Restless Heart, Whitesnake, Forevermore, Good to Be Bad, Slide it In, and David’s solo album Into the Light.

Hearing songs like Looking for Love and he hard rocking Crying In the Rain with a blues touch will send shivers down your spine.

It is definitely one for the collector as it has a nice remix swinging to the blues side cerca some of David’s early influences such as Muddy Waters, B.B. King, Howlin’ Wolf and others.

David and I chatted about other things such as one of my favorite guitarists Adrian Vandenberg (Adje) who is also one of David’s best friends and a former WS member.

This song which is one of the bands highest charting tunes wouldn’t have gone so high (in my opinion) without the guitar mastery of the solo in the song by Adje.

There was a bit of a coincidence as I was prepping for the interview; I was definitely going to ask about Vandenberg, who has also released Vandenberg 2020 which is a dynamite album that I reviewed earlier this year.

Anyway, I saw a clip recently on YouTube of Adrian being a guest on the Eddie Trunk radio show to discuss 2020. 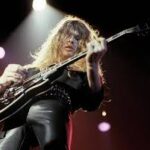 During the interview it came about that Adrian back in the day when recording the solo for Here I Go Again found himself holed up if in a bathroom stall or whatever in David’s California studio.

It turns out that during the mixing of Whitesnake (1987), there was a confrontation and yelling between David and former member guitarist John Sykes. As I heard on the show and David confirmed, over the phone Coverdale fired Sykes and John was so angry he actually hopped on a plane from the UK and ended up in the mixing room of the studio.

Adrian had been invited previously to join the band but had declined as per prior commitments. This time he was in DC’s crib to discuss things of this nature and David had also asked him to tune up the solo in the song.

I hope I haven’t lost or confused you; I am just trying to sum things up.

Anyway, it was a funny exchange the way Adrian told it as he had no clue about what was going on and to this day has never met Sykes.  He just happened to be in the back room “whittling” on his guitar and playing around with the solo when he heard the ruckus….and was pretty much cornered in the closet or room or whatever.

David said that there is much respect for Sykes musically but otherwise things weren’t working out.

Of the exchange David says Sykes told him “you can’t fire me!” and in an exerted exhale “yeah, watch me!” and that was it………….and basically Adje was in.

I told Coverdale about the interview with Trunk and he laughed; “yeah, Adrian should write a book, he’s got many good stories” 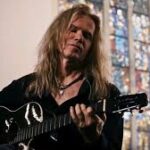 Anyway, it was really nice chatting with the Snake charmer and we have two things in common. He poked fun of my Canadian accent, bugging me about AbOuT!!!

You know every Canuck gets razzed. Apparently it sounds like we say A Boot.

On the flip side, I have to admit something that I have said in previous articles such as the one I did on Rob Helford of Judas Priest.

Isn’t it funny how a Brit can sing and sound like they are from Toronto or Los Angeles, but when they speak in conversation you can’t understand a bloody damn thing!!

Axeslinger of the day …. Vivian Campbell

Facebook Twitter Pinterest linkedin Telegram
Man oh man; I have always been a huge fan of the Irishman ever since I heard Holy Diver. Every track on that album plus The Last In Lin...