Yes, the Hounds were defeated 6-3 on home ice, by our rivals from Sudbury. The score really doesn’t indicated how the game progressed as the Hounds were buzzing most of the night and if I were to clock it; I think the edge would go to the Hounds for play time in the Wolves end of the rink.

A few miscues and the Wolves capitalized on their chances. Jack Thompson brought a 4 point game and we knew he would be a threat and pesky rookie Quenten Musty was always nipping at the Hounds heels. Even though he was held pointless, he managed 5 shots on goal and will have to be tamed the next time the two clubs meet.

On the Hounds side of things, I thought that Kirill Kudryavtsev had a good game even though he was minus 4. It could be that he logged a lot of ice time, but I saw quite a few times where he either intercepted pucks and plays, and he was good using his body to shield the puck. Although not known for his offensive abilities he did fake out a few Wolves forwards in the offensive zone on more than a few occasions. BTW, I am going to refer to him at times as KK….you know like KK Downing of Judas Priest…it’s much easier that way. 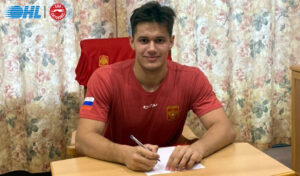 Anyway, McConnell-Barker showed flashes of skill and threat and for a younger kid he did seem to show a lot of confidence. He will be a big producer once he puts some size on and gets a few games under his belt.

Scoring for the Hounds were Cloutier, Boudreau, and Calvin Watson. 3Rd star Jacob Holmes had a good game with 2 assists and a +2 equation for the three periods of play.

I am sure John Dean will agree that the score doesn’t indicate the play of rookie netminder Samuel Ivanov. One of the six was an empty netter, one was a power play goal, and of the the other four Wolves tallies, I think one or maybe two were put behind him directly via a screen. He made some really bid saves at times and I think had a good game.

Now the other story may not be a story but I think it kind of is. With an average of close to 4000 fans attending every single game over the past 3 decades, and the lifting of restrictions to capacity as of Saturday, even though it was only 24 hours notice; I was literally shocked at all the empty seats in the arena. I figure with the lifting of restrictions announced Friday afternoon that word would get around like lightning. Fans of the team know what is going on and the ones getting ready to watch the game on the CHL Livestream and finding out they could actually get in the arena; well I thought 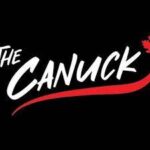 they would be fighting for a spot in line to grab a ticket. I was so wrong….I really don’t know what the reason is, but I do suspect that Vax Passports are a problem for people, fear of large settings, (thx to the mainstream media), and like a commenter said on a Hounds forum I am in…people might not want to stand outside in a Q waiting to get in as per the extra security steps involved.

I am sure the attendance will pick up but I think it is going to be slow and procedures to get in the building might have to be adjusted somehow.

Again, many might think that it was a matter of the public not knowing they could attend with the limits raised

to capacity, but I disagree; I think politics, personal choice, and procedures were the culprit.

Next up for the Dogs is a brutal road trip of three games in three nights starting this Thursday in Barrie. They will be without O’Rourke who will be serving the last game of his two game suspension. He will return for the next two games that will be Friday in Guelph, and the Dogs cap off the trip on Saturday in Owen Sound before returning home for a much needed rest.

Thanks for reading and Go Hounds Go !!!